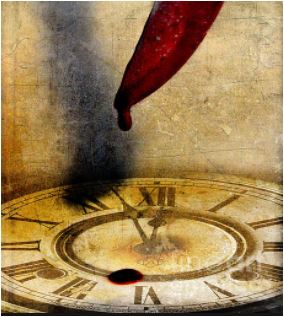 Vicente was out of breath. He leaned against a park bench, his mouth gaping open and closed like a goldfish.  The heat made him feel as though he was being smothered under thick wool blankets.

The sun sank below the shapes of Camelback Mountain and disappeared from view, but Phoenix still baked in the twilight.

There was no one in the park. He looked around him, paranoid and anxious. He couldn’t remember a time when Encanto Park had ever been empty. Even in the early AM hours, bums and addicts roamed the grounds begging for handouts or cigarettes.

Four parked cars were seemingly abandoned in the parking lot. Their owners were nowhere in sight.

An unlit, brick structure which served concessions and towels during the day to squealing-with-delight kids who lined up for the pool. Through its ebony glass front, he could see the interior, empty and soulless.

Pulling up his hoodie, he stood, swiveled away from the bench and glanced again at the surrounding area as he crossed the lot.

This ain’t right, Rory’s voice warned, the voice of his instinct.

His eyes couldn’t find anything wrong but there was something about the streetlights bordering the park. They were on but only emitted tiny cones of light. At this hour, Vic was sure the park’s own towering lights should have been on. Patches of pitch black swallowed entire sections of the park.

An iron fence surrounded the interior of the park. There were eight basketball courts, the hoops stood like forgotten soldiers in formation in front of the racquetball center. Behind the center, white lines marked the tennis courts which were barely visible.

No traffic came down 15th Ave on the west side of the park grounds. In fact, Vic could not hear a single noise — car, person or otherwise. It was as if the city as one held its breath.

Heavy night air wrapped its arms around him, pressing in on him. The only noise he heard was his own heartbeat. More of the buildings in the distance were swallowed in pitch black. The charcoal wave washed along the western horizon, snuffing out the dots of light one by one. They popped and twinkled away like shooting stars.

An energy radiated through him, pricking his skin. Fear lifted the hair on the back of his head. Involuntarily, he walked backward, away from the sight. After hours, the gates were closed, and the fences padlocked but that didn’t deter him. He heaved up and thrust his body up and over the top of the gate with a practiced precision.

He saw a set of cement dugouts above the dips of a skate park ahead. It wouldn’t be comfortable, but they would provide a little shelter and a place to sleep for the night. He tried to pretend all was safe and right.

“Park is closed.” A husky voice came out of nowhere behind him.

Vic spun on his heels.

No one was there.

He peered into the gloom, straining his eyes.

He blinked and blinked again. The high rises on the eastern horizon were darkening. Their lights weren’t turning off but were fading as if their energy sources were being drained to nothing.

All around the park, the city shut its bright eyes and slept inside the ebony blanket he saw earlier.

“Park is closed!” the voice rasped over his right shoulder, louder this time.

Vic spotted a lanky figure, hovering in the murky shadows of the racquetball center. No one had been there moments before.

He couldn’t make out the features, but he guessed by the stature, it was a man.  Moonlight suddenly fell over the curls of a thick beard, but he didn’t make any movement or sound.

“Hello?” Vic called out. In spite of being on the run and knowing he shouldn’t be attracting attention to himself, he felt compelled to react.

The Beard started forward, his feet making no sound as they skimmed over the concrete. “I see you too.”

Vic charged to the left, sprinting through the sands of the volleyball courts.

“Where are my hands, you bastard?” A high-pitched woman’s voice followed him, terse and angry.

He skidded to a stop and spun around, his eyes searching.

“You know who,” the feminine voice answered, but the words gurgled as they passed through her lips.

The voice came from a lump of shadows at the base of a park lighting pole. A woman struggled to her knees and bucked forward, then staggered to her feet.  Above her, the lamp burst on.  Light washed over her gaunt and bloody features. Dirt caked her cheeks and patches of white skull gleamed through her thinning blonde hair.

“Give them back to me. Give me my hands!”

What the hell is this?

“The park is closed! CCCCLLLLOOOOSSSSEEEDDD!” The Beard came from behind him and was only a few feet away. His features were still obscured in a smoky mist swirling around him.

Vic retrieved a serrated knife from his waistband and brandished it. “Get the fuck away from me!”

Trembling, he swung the blade back and forth in a semi-circle in front of him.

“That isn’t your knife. At least, not the one you used before.”

Another feminine voice came at him from below, down by his sneakers.

A naked body, missing arms and legs, thrashed in a pool of syrupy blood.

“Where is the knife you used on me before you stuffed me in the trunk?” she garbled, choking on ropes of blood oozing out with her words.

“Why did you do this to us?” He snapped his head up to a woman hanging from another park light pole. Blood dripped in endless streams from dozens of cuts and lacerations. She was strung up with a white and blue-striped nylon rope.

“We all saw you,” they chanted as one back at him. A hand clamped down on his leg above the ankle. He felt the cold of her skin through the material of his jeans.

He twisted to escape, but his leg remained locked in her icy grip.

Vic shrieked again when he felt another set of crawling fingers working up his right shoulder. A severed hand, pale with freshly done fingernails, grabbed at his face, covering his mouth. He lost his balance and fell with a loud splash into a puddle of blood.

“Make this easy, buddy. Tell us where the others are and we’ll work out a deal with them,” the fat detective said as he chuckled and drank from his Circle K foam cup.  Half of his face looked like he scratched it off with his own fingernails.  Shining white teeth gleamed out as he gave Vic a wide smile and wink.

“We don’t have to hand you over,” Kemp, the skinny black detective said as he knelt next to Vic. He poked a thumb at the thrashing body that was rolling closer. “You left her teeth. She’s going to use them.”

NOO! his mind shrieked. Reality cracked and splintered into shards like a mirror.  The world bucked up and down under him.

Pain exploded in his head and a lightning flash of agony blinded him. He rolled over onto his back groaning and clutching at his forehead. Rivulets of blood pumped between his fingers. Daylight pierced his vision and speared directly into his brain.

As his headache blossomed, morning had come after all. He was lying in the concrete dugout among spit out gum and dog piss under the stone bench he used as a bed. He’d cracked his head on a steel bar fence in his sleep.

The graphic nightmare replayed in his head. Not a single detail faded. No dream had ever come so close to reality before for him. His breath was ragged, and his body trembled from the terror.

Then a voice whispered inside his head. It spoke independent and on its own…

I see you, the voice repeated.  This time it was followed by a giggle.

There at eye-level, a serrated knife sat on the bench, shining in the sunlight. It hadn’t been there when he’d gone to sleep.

It was his knife though. The knife he left at the house he shared with Cat, packed away under his bed. Someone retrieved it, placed it by his head and left while he was tortured by the nightmare.

His lips pressed into a thin line and his jaw locked when he spotted two distinct and wet, bloody fingerprints on the handle.

WHO THE HELL IS DOING THIS TO ME?