I will have the great honor of hosting a book-signing event and GIVEAWAYS in person at the Phoenix, Arizona location.  If you are available or in the vicinity, please come by and see me at 3:00 PM.

There will be two Audiobook giveaways (No purchase necessary to win, just an email address to enter):

1 WINNER FOR:  CONSEQUENCES WITHIN CHAOS &

1 WINNER FOR:  IN FOUR DAYS

1 GRAND WINNER will get 2 FREE signed copies of any 2 of my paperbacks of their choice.

Bookmans is a great store and there are definitely books, games and unique items for everyone and every taste there!!

Would love to see everyone!

I have been for over a year now getting Audible books so I decided I would review and share my opinion on some of them with you. Enjoy!

This is the introduction novel into a vast and complex story told over fourteen novels (Yes, Fourteen!).  The central theme of the books revolves around three young boys who are destined to battle the devil-like, Shai’tan, in the oncoming Tarmon Gai’don, the “end of the world”.

The Wheel of Time turns and Ages come and go, leaving memories that become legend. Legend fades to myth, and even myth is long forgotten when the Age that gave it birth returns again. In the Third Age, an Age of Prophecy, the World and Time themselves hang in the balance. What was, what will be, and what is, may yet fall under the Shadow.

When The Two Rivers is attacked by Trollocs—a savage tribe of half-men, half-beasts— five villagers flee that night into a world they barely imagined, with new dangers waiting in the shadows and in the light.

Jordan’s world is extremely well-defined and this book is considered “High Fantasy” — defined as fantasy set in an alternative, fictional (“secondary”) world, rather than “the real”, or “primary” world.  Lord of the Rings by J.R.R. Tolkien is considered one of the op High Fantasy works in literature.

The story starts out simple as it revolves around three farm boys:  Rand al’Thor,  Matrim Cauthon and Perrin Aybara.  In a single night, their lives are torn apart and turned upside down by an attack on their village.  The boys are forced to leave with an Aes Sedai, a female mage known as Moiraine and her warrior-protector, Lan.

I found the tale very intriguing and exciting.   It kept me completely immersed in its world of dangers and unknowns.  The characters are extremely well-defined with complex motives and background.  At the end of the first book, The Eyes of the World, I bought the second novel because I was hooked and couldn’t wait to read more.  I am on Book Six now and, unfortunately, my interests have waned.

My complaint would be that there are too many characters, too much information and too often the names that are unpronounceable which makes them even harder to remember.  I don’t think I have the patience in me to get to Book Fourteen!

Now, I have fallen into the same trap in my own writing and have learned that readers simply do not want to work that hard to remember that much detail.  I found that I had the same issue with George R.R. Martin’s Songs of Ice series which I had to make an Excel Spreadsheet just to remember who was where and doing what!

Great storyline, great characters and a fantastic tale that is soon to be made into a television series —

Michael Kramer and Kate Reading do an incredible job at narrating this tale with all of its intricate dialogs, multiple characters (both human and humanoid) and alternate narrative voices depending on the gender of the Point-of-View of the chapter.  Kramer has received much praise for his narrations.  Even the Library Journal stating that Kramer reads “clearly and intensely”.

Kramer lives in Washington, D.C. area with his wife, Jennifer Mendenhall (aka Kate Reading), and their two children.   Kramer also works as an actor in the local theater.

Four Stars as the story is exceptional and embracing.  You care what happens next to each of the characters.  It has plenty of high-action scenes balanced with in-depth character development.  RECOMMENDED!

By Derek Barton — Author of Dark Fantasy novels: Consequences Within Chaos and The Bleeding Crown.  Also the author or In Four Days: a Horror-Suspense Novella and Elude: Part One (horror/crime thriller) will be on sale by the end of 2018! 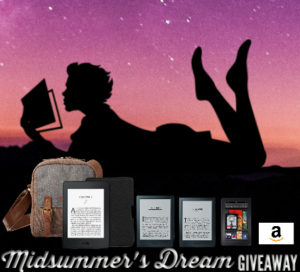 Summer’s flying by and it’s finally time to Enter the $500 Midsummer’s Dream Giveaway. With 6 amazing prizes, this giveaway is steaming hot.

So tell your reader friends to Enter the $500 Midsummer’s-Dream Giveaway and get bonus entry points, grab a copy of one or more of our sponsor’s highly rated books, free, or discounted deals.

HOW: Scroll through the book covers below and make a note of the books that appeal to you. Then enter the Rafflecopter form below. You can get BONUS entry points every day for sharing and supporting our sponsoring authors.

HINT: There is no purchase necessary to win, but you get BONUS entry points every day you support our sponsors. And, YES, you can buy our sponsors’ books. In fact, please do; it’s the only way we can continue these awesome giveaways. So scroll through the book covers below and check out the books that appeal to you. Then follow the authors that write the kind of books you love in the Rafflecopter form below. Who knows, you just might find your next favorite author! Have a great summer, and good luck, readers!

FOR THE AUDIOBOOK COPY OF CONSEQUENCES WITHIN CHAOS —

FOR THE SIGNED COPIES OF THE BLEEDING CROWN —

Congrats to the winners!!!

Thank you all for your interests and participation in the Giveaways!  Hope you enjoy it!!  Keep an eye out for an email from me getting your mailing information.