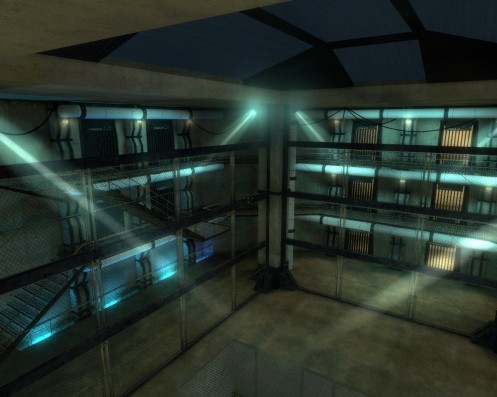 Thomass stretched his neck, staring up into Enddawn’s blackened skylights high overhead. A massive storm crashed and raged over the building, flickers of lightning streaked along the storm’s underbelly.

It’s another record-breaking storm…just like the one on the night she died.

A thunderclap set off a brief spark in his mind’s eye — his sister, running right behind him through gales of pouring rain. The Crest’s raid on his village had already separated them from their father. Her tiny hand ripped violently from his grip. An explosion from a cannon cluster only yards ahead of them had launched the pair to the left and on top of a rubble pile. Moments later, the soldiers found him, semi-conscious, covered in her blood as he lay a few feet below her impaled body. Ppt. PPt. PPt. Phantom drops pooling on his chest.

The faint clatter of hail snapped him back to reality as it bounced off of the skylight glass, almost drowning out Overseer Thressden’s words.

No one here is ever that lucky.

As if he had the same thought, the Overseer of Kav’zera’s prison encampment gripped the microphone stand attached to a gray cabinet. He stood upon a floating metal platform, hovering above the crowd. He angled the mic closer to his face. His voice was a deep bass and a bit on the gritty-side.

“…The incursion into Bre’oal has interrupted our normal supply caravans. I understand that some of you have been harking this as a positive, a victory of sorts for your fellow traitors among the Yularis.” He paused and his eyes scanned the crowd of youths standing in line formation in front of him. Not a single face was raised or a pair of eyes upturned to meet his.

The first rule at Enddawn impressed upon newcomers, normally on the receiving end of an ionized baton, is that no one is ever to look in the face of the Crest Overseer or any of the Malatt guards.

“Meal rations will be reduced to two half-meals per day until further notice. I realize this might seem taxing or harsh to some of you, but in such violent times as these, one must be resolved and steadfast. To be shining examples to those around you who might be seeking direction. Your sacrifices and efforts to make sure the colonists eat before you are recognized by me and the Council. The Crest will always be there — to take responsibility for you. President-General Rhiet may not understand your recent betrayals, but he’s given you this gift of a second chance to join society. You are here to re-educate yourselves and—”

Sudden and shock-induced laughter erupted through the crowd of eighteen prisoners. Everyone’s eyes found him as he stood in a tight-knit group of four. He’d only been brought here two months before, but already he’d won the loyalty of many of the ex-patriots.

Realizing what happened, everyone tightly held their breath and waited for a new storm to burst. Thomass leaned and peeked past his closest ally, Rovunn, to the side where the carbon glass reflected the Overseer’s image.

Overseer Thressden, thick in a frame which was more iron muscle than any fat, stared in stony silence. His piercing black eyes matched his salt-and-pepper flat-top hair and matching thin goatee. The man made no movement and seemed to be seeing Thomass for the first time ever. Capturing Thomass’ image of stark white hair, heavyset body and crystaline blue eyes.

“Indeed, some of you will never come to appreciate the blessings of the Crest,” Overseer Thressden continued. He then took a deep breath and pressed forward with his speech of prepared propaganda.

Thomass didn’t know if he was spared or if the Overseer hadn’t actually seen him. Either way, he knew his mouth had nearly cost him again.

On the other side of Rovunn, Welleum, a thin boy with shaggy sandy hair, slid his right boot to the side, dragging a parcel of white paper. Rovunn checked to see where the guards were then with care stepped lightly over the paper and slid it to Thomass.

After copying Rovunn’s spot-check of the Malatt, he slowly dropped down, pretending to tie his boot. Lifting his foot, he read:

Using the end of his bootlace which he’d dipped previously into pencil shavings, he marked a Y on the note next to the name Dodgens, the guard who they intended to bribe.

‘Bout time! That cockroach won’t do this again after tonight.

Charells, one of Thomass’ group, was recovering in the infirmary for his stolen food rations. “L.S.” was the abbreviation for “lesson-session” which is what Hernandez was going to get for snitching on Charells to the Malatt.

As Thomass stood, he slid the note with his boot down the line intended for the prisoner Elexendar. The idiot bent down and picked up the paper without thought, reading it before his face. Greige, a dark, olive-skinned boy snatched the paper out of the his hands and ate the note.

“ENOUGH!” The Overseer roared as he swept the hoverplate down right above their bowed heads.

Thomass could feel the waves of heat from the plate’s engines. He knew the man was directly over him. His shaking hand came up and swiped nervously at his long bangs.

Intense rolling pain coursed along his left side and down through his boots. The series of electrified stingers gripped the muscles in his calf so sharply his toes even curled by reflex. As he sprawled onto his back in pure agony upon the concrete floor, Thomass could not even remember the rest of what he was going to say.

At the front of the prisoner lines, the Overseer landed his hoverplate. Two sets of hands gripped Thomass’ arms and drug him on his back. The Malatt then pressed his face to the floor before Overseer Thressden as he removed a charged Viperglove from a shelf in the cabinet.

“Prisoner Thomass, why have you stopped answering me?” His fist, wrapped in a red metal gauntlet, rained down and struck between Thomass’ shoulders.

“I asked you for a reason for your lack of engagement.” Another strike landed on his right hand breaking two of the boy’s fingers.

The Overseer coated in a fine sheen of sweat shook his head. “I don’t think you understand the language we speak here.” The fist then cracked the left kneecap.

“You seem unwilling to speak to me. You’ll have some time to think about it in The Shaft.” Thomass didn’t know where the last strike hit him as the metal Viperglove blasted him into unconsciousness.

A set of handcuffs dug deep into Thomass’ wrists, blackened welts formed in a loop. The tips of his boots barely touched the floor as he was suspended from chains in a blue neon-lit shaft.

Voices, muted and slurred, whispered to him. The words chanted in a sing-song tempo.

This is not the end of your Tale.

Speak with the freedom of Death.

There was an unusual accent, a foreign element to the speech. He was almost entertained by it. A faint smile crept over his lips.

“Who’s there?” Thomass mumbled, his lips cracked and baked by the neon lamps.

The voices clashed and clouded together as the whispers were said at the same time.

“Who’s there?” Thomass repeated, a little louder this time.

There was no response and he was met only with silence. However, the pain in his back and hands, especially his right began to speak to him.

So this is what they’re all afraid of? This is The Shaft?

He’d gotten a few worse injuries in some of the Yularis clashes than what the Overseer had done to him, but he doubted he’d see the infirmary soon. Yet when he first came to the Enddawn Encampment, all they talked and gossiped about was what happened in The Shaft. Terrible, nightmarish stories.

Again, the strange voices echoed in the quiet of The Shaft. This time he realized he hadn’t truly heard the words. They rang out in the recesses of his mind.

Suddenly a voice answered inside him, demanding, Spirit tell me your name.

It’s Thomass… Who in the Viles are you?

And the voice actually replied.