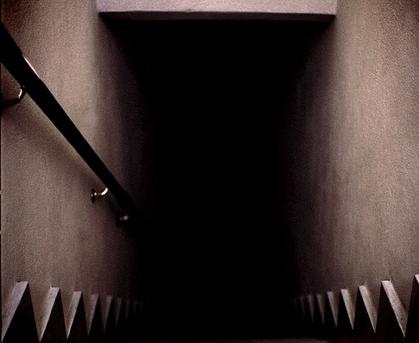 Last night, my nerves got the best of me so I took Rayray out of the apartment and we rode into town.  I wanted to be with people and in the public view.

I had been wracking my head trying to figure out what was happening.  Was this just some creep with a flair for theatrics?  Was this something worse?  Or could I be having a breakdown of sorts?

I needed to know and I had this sinking feeling that time was running out for me. Nothing on the internet had given me any clue of what I am dealing with.

On the freeway we encountered a huge traffic jam.  While it delayed us for about an hour, being surrounded by a dozen or so cars crammed with people helped and I felt the most secure that I have been since my world unfolded.

It was the weekend and on Friday nights they always have a large live music gathering inside the pavilion at East Fairmont Park.  My ex-boyfriend Tad used to take me there, mainly to score a bag of weed while I listened to the music.  It should be overcrowded and well lit.  Perfect and just what I want.

On Cranston Heights Boulevard, I pulled into the B*** of A******’s parking lot to get cash.  The park’s ticket booths weren’t set up for cards and I always liked tipping some of the street performers as well.  At its east corner was an ATM in a small glass enclosure attached to the main building.  The enclosure was nothing more than a carpeted rectangle with the ATM in its back wall, a small trashcan and plant.  Next to the machine, a single door marked STAIRS.

Two street lamps bookend the ATM and blanketed the lot with bright light.  I had become very sensitive to knowing where all the lights were, scanning the surroundings and took nothing for granted.  I was taking note of everything.

Rayray whined as he sensed my apprehension and he stayed obediently at my heels as we crossed the lot and entered the small room.

Inside, the air was warm and stale – a heating vent blew directly overhead in between two sets of track lights.

“Oh.. oh.. shit, no!” I muttered as I rummaged through my cluttered purse – my debit card was not in its slot in my wallet.  I finally found it buried in a side pocket and I slid it into the machine with a heavy sigh.

The ATM chimed loudly as it accepted the card.  The screen suddenly blinked at me and then turned off.

My heart began to pound. I glanced over my shoulder to see the empty lot behind me.

I couldn’t believe I left myself alone and open once again!

Another chime from the machine behind me.

That’s three chimes… my brain screamed at me.

I backed up against it just as the street lamp on the right of the ATM enclosure burst into a shower of sparks, followed up by the lamp on the left. The lot fell under a cloak of absolute darkness.  Death was surely perched to pounce upon me if I left the enclosure.

The room grew colder, the air itself denser.  The track lighting sets flickered and then died too.

One more chime signaled his presence.

Rayray growled and his fur bristled as he stepped in front of me.

On pure instinct, I bolted for the door marked as STAIRS.  He was not getting next to me ever again!

A sudden blast of icy wind came from the open door behind me as he broke into the enclosure.

“Rayray come!”  I screeched as I lunged through the STAIRS door and descended the steps.

Behind me,  the STAIRS door slammed shut.  I had no idea where this stairwell was leading me to, but I couldn’t think straight at this point.

Parallel lines of fluorescents on the walls began to explode as I approached them.  The blackness followed at my heels like a stalking wolf.

But even blind I ran or stumbled on – I think I traveled down almost five flights to the bottom.  There I found only a chained door with a tiny window looking out at an abandoned underground parking lot.  I waited helpless and shivering against it.  Sitting in the cold, trapped in a pit while the abomination hunted above for me.

What would come next?  I realized that I could hear absolutely nothing.  No wind, no breathing, no sounds of traffic.  Not even the ATM chimes.

He isn’t gone.  I knew this deep in the core of my being.  He wasn’t done with me.

Or did he already kill me and this is death? Laying blind in the cold?  The thought raced through my mind before I could contain it.  Perhaps I am already lying in my coffin and I don’t even know it?

I stared up into the black maw of the stairwell.

Then a brief hope flickered in my head.  I began to rummage through my purse again, feeling around.

My fingers finally curled around my prize just as a sound echoed down to me.

I wondered if the ceiling maybe had sprung a leak, but that just seemed unlikely.

And it wasn’t raining when we came into the bank!  My brain screamed at me once again.

The steady patter of drops grew stronger and splashed loudly on the cement floor in front of my legs.  A stream of drops formed into a puddle.

Then just behind the sounds of the drops, I heard his heavy, dragging footsteps.

His muck-covered boots stuck to the metal stairs.  Was he pouring something over the steps?

When he got to the landing just above mine, the drops finally faltered and came to a stop. Something heavy was then dropped at his feet.

I held my breath; my heart nearly bursting from the confines of my chest and waited for the words I knew were coming.

I was better prepped this time – I raised a pen flashlight I had carried in the purse and clicked the flashlight on.  The small beam of light cut through the gloom and illuminated the landing – a towering, shadowy figure stood there in a hooded, black rain slicker, mud-caked jeans tucked into mucked over boots.   He roared and his shape swirled away from the beam and his features bled into the dark shadows of the stairwell.

But as I said before – I SAW THE BASTARD’S FACE!

The skin of his cheeks were leathery and drawn, pulled down tight toward his chest. His chin covered in coarse grey and brown hair.  His bluish lips were thin and his mouth pressed tight into a single line.  The nose was very thin, beak-like and cleft at the end.

But the eyes, the eyes… were missing.  There were three, empty black hollow sockets; one sitting on two in some skeletal-like pyramid.

I think I fainted.  I don’t remember even how I got back to my apartment.

I don’t even know where Rayray is.  I am all alone…